Contrary to my last theater film (John Wick 2) I went into this one expecting not to like it. It’s a Disney remake for crying out loud. The original is great and there’s zero reason to mess with it and make a verbatim live action, Emma Watson infused, follow up. (Besides being an blatantly obvious money grab of course!) So I had my doubts as well as zero intentions of seeing this in the theaters, but when my beloved Slickdeal app sent me a notification for buy-one-get-one free for a theater 0.4 miles from my front door on an otherwise boring Friday night, two tickets were bought. To makes things more memorable my girlfriend and myself were both late to the theater (thankfully only missing 95% of the crappy previews) so we were unable to sit together which unknowingly forced me to ask a girl with a broken leg if she could move to I could get through (immediately feeling horrible the second I realized what I just did), but she insisted (of course) that she hobble up and out of my way as my heart sank into oblivion. This was karma was immediately paid forward as I then had the amazing opportunity of sitting next to a single middle-aged hispanic man with a manic laugh which lighted off anytime he thought something was even remotely entertaining occurred on screen (including some surprisingly dark moments towards the end). Just shoot me. Please.

Now for my thoughts on the movie! It was honestly great. I read great reviews before seeing it and bad. (A very critically polar film if you ask me.) Plus I honestly was not impressed with the trailer. Don’t get me wrong, Emma Watson is my favorite chicky-babe to watch on screen, but the whole thing just looked off. The combination of Emma paired with a CGI giant didn’t seem like it was going to work compared to the original animated 1991 version. Thankfully, I couldn’t have been more wrong. The beast NEEDED to be CGI, otherwise an actor on stilts would have looked horrible or a CGI main character (Emma) would have forced me not to care. I additionally had my reserves of the beast’s enhanced voice since my encounter with a voiceover was Bane in Batman: Dark Knight Rises which gave me a headache, wondering what the f*** was just said and ultimately frustrated I couldn’t comprehend 1/2 the dialog. Thankfully Disney murdered the voice. It was dark and menacing at times but appropriately soft and gently at others, always maintaining a level of absolute clarity.

To finish my review swiftly (I still have unfinished question banks to complete thanks in part to a prolonged nap my lady friend let me sleep through combined with a week of flip-flopping shift work 😥 ) each aspect of this movie was done superbly. The song and dance was present and besides maybe the first piece in the village (which was rather plain) the rest were incredible. One in particular, during the first dinner at the castle and lead by the candleman himself (Lumiere, voiced by Ewan McGregor) could be one of my favorite pieces of all time! It was both visually stunning watching the characters/lights wiz around on screen but the music, oh the music, was perfection! I would even go as far as saying that ‘Beauty and the Beast’ had slightly better music than La La Land. (Not choreography, just song).

Lastly the characters were chosen perfectly. Obviously I was a fan of the beast & Emma, but the supporting cast was simply great. The home run was LeFou (Josh Gad). He’s like Jonah Hill, but better. I literally laughed every. time. that guy opened his mouth! (But obviously not as much as the wacko next to me. F that guy. jk.). Interestingly Disney opted to include a (albeit, controversial) homosexual love-interest in this movie which didn’t once feel out of place or in diastase. It was cute, playful, and honestly if given the option I would choose the movie with it included since it simply made certain scenes in the movie. Finally Gaston (Luke Evans) I sat on the fence with for a while. Was he good or bad? Should he of been cast otherwise? Did I find him funny? I don’t like having to think whether I like a character or not. That’s not good. I should LOVE them since he’s in a Disney movie, right? After his first appearance I didn’t like him. He simply seemed to be “acting” too much. Almost like he was theatrically trained but cast in a normal movie. After some thought however I realized I loved his character. I hated him when I had to, liked him when I should have, enjoyed his fate (whatever that may be 😉 ) and ultimately couldn’t pick a single better A/B-list actor to replace him with.

So one-zo-done-zo! I loved it. Seeing this movie left me happy, teary eyed (since I’m a boneafied bitch) but surprisingly NOT excited for more remakes. I’m happy they did this one, I’m glad everything worked, but am not at all excited to see any of my other favorite Disney films appear on the RottenTomatoe chopping blocks (unless Pia Muehlenbeck or Priya Rai get cast as Jasmine or Emma Watson has some secret sisters out there in the world we unfortunately don’t know of yet). Ultimately, I prefer this to be a childhood chapter best kept closed. (As a bonus here’s a cast photo with corresponding roles) Enjoy! 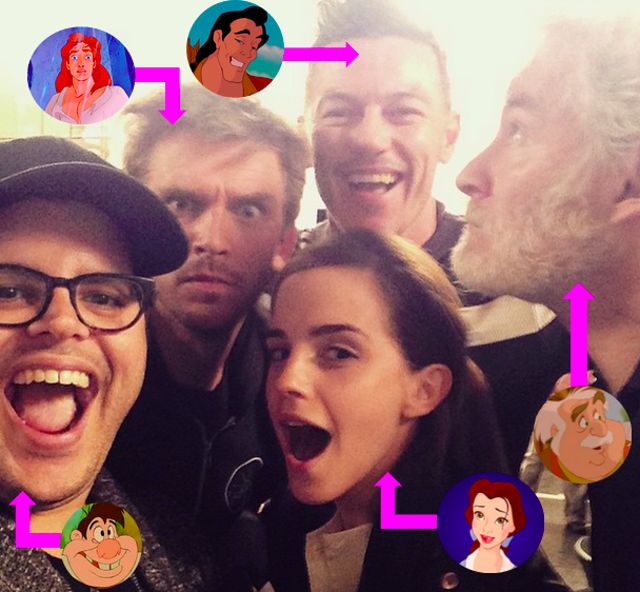