There’s always areas of medicine you never knew existed until someone removes the blindfolds from before your eyes. While I’m assuming the majority of people can at least stumble through some botched definition of Acupuncture I’d be willing to wager you’ll be greeted with blank faces if you asked about Chapman Reflex Points. Defined by Wikipedia as “small, discrete tissue texture changes located just deep to the skin. The Chapman point is hypothesized to be an outward physical representation of internal dysfunction or pathology of an organ system.” Basically if you’re having a heart problem you should be able to located a discrete, palpable area on your body that feels distinctly different from when you’re healthy. Critically, using this framework by applying it the opposite way, if you know specifically where to look, you can identify internal dysfunctions through external tissue texture changes and use them to help diagnose & treat your patients. Sound familiar? Maybe not immediately, but if you take a second to think it does sound strikingly similar to Acupuncture. Everyone at some point in their lives has walked through a mall only to be greeted by a traditional Chinese depiction of the body with miniature organs overlaying specific areas. Have eye problems? There’s a magical point on your body to cure that. Lower back pain, aka every American ever. Yep! Multiple spots for that too.

While Wikipedia cites Acupunctures creation at or before 100 BC, Chapman points were only conceptualization by Dr. Frank Chapman in 1920, making them seemingly light years newer. However, their concepts are similar (organ dysfunction presenting through external means). While hunting online I located a very concise comparison of the two appropriately titled “Relationship Between Chapman’s Reflexes and Acupuncture Meridians by Traditional Chinese Medicine Practitioners in Taiwan” by a medical student in California which I will link here. His findings: clinical and spatial correlations exist between anterior chapman points and acupuncture points. Cool beans! I won’t bored those uninterested  with the details here, but this strikes an internal cords with you feel free to open that short PowerPoint up and have at it.  Now, simply because Chapman points look so cool I wanted to share two depictions of their locations draw beautifully by Pat Block. 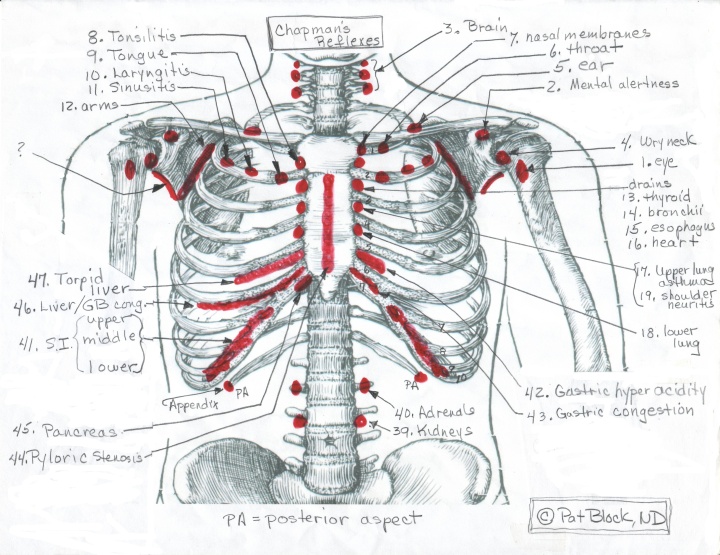 So, next time you have a medical problem refer back to these diagrams and see if you can locate specific areas of tissue texture change illustrated below and let me know what you find! Happy huntings 🙂